The CyberMaxx Virtual Reality Helmet was manufactured by VictorMaxx Technologies. The headset contains twin TFT Active Matrix video displays coupled with stereo headphones to form a live-action 3D-Stereo Video Virtual Reality environment. Additionally, the Headset contains a 3D motion tracking unit capable of discerning head movements which are used by the host PC to manipulate the VR experience. The unit could accept either NTSC (North American broadcast standard) video or could accept VGA computer video data. Audio was input via separate left and right channel RCA jacks, or through a 1/8" stereo plug. The tracking data for head movement was output as serial data through a 9-pin connector. All power, video, audio and tracking data connections were fanned out through a breakout connector described below.

Click on the image below to see a block diagram of the major components of the CyberMaxx VR headset. 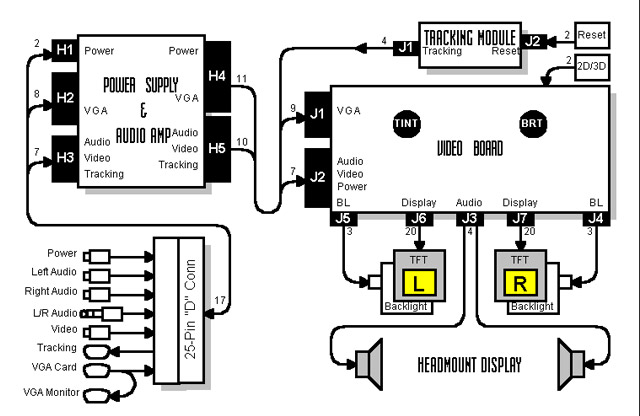 Six input cables and one output cable are channeled through a single 25-pin "D" breakout connector.

The combined 6-foot "umbilical" cable is routed to a belt-clip unit which contains the power supply (with power switch) and audio amplifier (with volume adjustment). The power supply converts the un-regulated 9VDC input to provide +18VDC (to drive the TFT Display Panels), +12VDC (for the NTSC-to-RGB decoder/driver),and +5VDC (for misc logic). The un-regulated 9VDC is also passed through to the tracker board (located in the headset) as it contains its own voltage regulator circuitry. All of these signals are connected to the Virtual Reality Helmet by a second, 4-foot, cable.

The headset, in addition to containing the stereo audio headphones, contains the Head Tracker Module, and the Video Display Boards.

This self-contained module senses both the earth’s magnetic and gravitational fields and by synthesizing the results continuously updates the host PC with the orientation of the helmet as a sequence of "roll", "pitch" and "yaw" values. A single reset switch allows the user to re-zero the unit to his rest position.

The gravitational field is sensed by a vertical fluid filled detector. It could not be immediately determined if the detector operated on variable capacitance or resistance principles. Two plate pairs, relative to a fifth ground plate are used. The pair along the x-axis (ear to ear) provide "roll" information, while the y-axis (front to back) provide "pitch" information. Each has a range of about +/- 45-degrees.

The magnetic field detector is used primarily for sensing "yaw"information. Its values range from 0-degrees to 360-degrees;same as the compass headings. Three perpendicular coils are used.The x-coil (from ear to ear), the y-coil (pointing outward from the nose) and the z-coil (up and down).

Since on the earth’s surface the magnetic field running from North to South is intersected by the perpendicular gravitational field, sufficient information is available from the five sensors (2-gravity, 3-magnetic) to synthesize the resultant "roll", "pitch"and "yaw" values. The information is continuously conveyed on the comm port at 19.2kbaud. Each line is of the form:

This example would represent the helmet facing nominally East, head slightly down, and cocked towards right shoulder (assuming the unit was zeroed on a horizontal, north-facing orientation).

A variety of Stereo-3D techniques have historically been used which present slighty disparate images to the left and right eyes allowing the brain to perceive a three dimensional scene. In one popular system used with video screens, a pair of Liquid Crystal Shutters is worn like eyeglasses. A display monitor is viewed while a synchronizing signal allows only the left eye or only the right eye to see the display. The display refresh is sufficiently rapid such that the brain perceives a continuous image. The computer presents images from slightly different viewpoints to the left and right eyes, and a three dimensional image is perceived. This is the same technique used on low end SEGA Video Games or high end Silicon Graphics workstations equipped with the StereoGraphics systems.

Alternately, the CyberMaxx unit was able to take a RGB signal directly from a host PC’s VGA connector. In this case, appropriate software on the PC re-programs the VGA controller to create the necessary interleaved picture with appropriate NTSC timing. While the quality of the RGB signal is vastly superior to the heavily encoded NTSC video signal, computer compatibility problems relative to the VGA controllers from various manufacturers makes this latter choice questionable.

In the CyberMaxx the Video Display is comprised of two miniature Matsushita TFT Active Matrix LCDs with intregrated drivers (MCL0712A03). These were originally developed for Electronic View Finder systems (for Video Camcorders) and for Consumer Video Projection Systems. A companion driver chip (MN83803AK, also from Matsushita) is used to drive the multiple phases of horizontal and vertical clocks that sequence the horizontal and vertical shift-registers on the display panel substrates. A single driver chip is used to drive both displays. All clock and data lines to the two displays are connected in parallel with a single exception.

On the CyberMaxx Video Board there is logic (implemented as two PALs) which can inhibit the Hdata signal to either panel. This is the single control line necessary to uniquely address each panel. If a panel fails to receive the Hdata signal, despite the fact that its Hclocks are running, that panel will not update the display array. The logic implemented is such that each panel is inhibited for every-other scan line when running in Stereo3D mode. This is not to be confused with the normal interlace present in an NTSC video signal. In the CyberMaxx system, as these scanlines come in at 63.5uS (the 15734Hz sweep rate), one line is sent to the left panel, and the next line to the right. This minimizes flicker which tends to be a problem with other left/right video techniques.

The CyberMaxx headset uses Sharp’s IR3Y05 Video Processing chip which is specifically designed for LCD Color Viewfinders. In addition to the NTSC-RGB decoder, this chip has a second port for an auxiliary RGB input. This is where the RGB signal from the VGA display is connected. CyberMaxx uses only two adjustments on this chip. TINT, which affects only the NTSC signal, and BRIGHTNESS which affects both the NTSC and RGB signals. Other inputs, such as SHARPNESS, COLOR, SUB-RIGHTNESS, GAMMA, and GAIN, are set to fixed values.

Two features of the Sharp chip, specific to LCD panels, need to be mentioned.

The relationship between drive voltage and brightness on a CRT is not linear. Roughly, it is exponential, with a coefficient of 2.2. The NTSC video standard expects to see this gamma relationship. LCD panels, however, have a much more complicated voltage to brigntness transfer function. The Sharp chip has two gamma control inputs which shape the voltage-in to voltage-out curve, to allow an LCD to mimic a CRT. Without such curve shaping, the LCD tends to be either washed-out in one case or over-contrasted in another, depending on the LCD panel technology.

Liquid Crystal Displays come in two types: normally white and normally black, depending on the arrangement of the polarizing filters.The Matsushita panels are normally white. It should be noted that the Liquid Crystal material in LCDs is subject to destructive breakdown if a continuous DC bias is applied accross the pixel cell for any lengthy period of time.

In an effort to avoid such DC-induced breakdown, the CyberMaxx unit utilized the Sharp IR3Y05 Video Processing chip’s ability to provide voltage inversion toggled by the frame rate pulse (FRP). The normal implementation of the Sharp chip was apparently intended to cause alternate video frames to have the voltage inverted around Vcom (see diagram below) to prevent a net DC voltage from being present for any length of time. As shown in the diagram, on one pass a given scan line might be driven from 7 volts to 10 volts for black to white, while on the subsequent pass the same scan line would be driven from 5 volts to 2 volts for black to white. The net result is that, relative to Vcom, no net DC voltage appears.

In the CyberMaxx system, however, the FRP is toggled once per scan line. This was apparently done to reduce flicker, however this has the effect of sending the positive pulse (with reference to Vcom) to one LCD, and the negative pulse to the other, which seems to be an incorrect implementation. This would result in DC levels being repeated over time to the LCD pixels. Users of the CyberMaxx video board should bear this in mind when utilizing this item with pairs of LCD panels.

Click on the diagram below to see a graph of the video voltage inversion toggled by the frame rate pulse.

For those who wish to develop their own drive circuitry to supply video to the Matsushita LCD panels, a further consideration must be given to the timing of the clock pulses. As can be seen in the diagram below (developed by looking at the LCD through a microscope), there are four horizontal clock pulse circuits driving three chains of red, blue and green pixels. With the pixels arranged in a RGB-delta configuration, it can be seen that the pixels on the same chain are offset in alternate rows. Consideration must be given in timing the HCP data to be somewhat delayed for alternate rows.

Click on the diagram below to see a larger representation of the cells and drivers of the LCD panel.