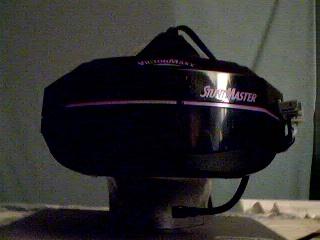 This project is fairly easy. In a nutshell I take the guts out of a UR Gear controller and place them inside the Stuntmaster Headset. This gives the Stuntmaster Infrared Headtracking, a microphone, and a handheld controller. That combined with a VGA to NTSC converter and you have a decent low-end headset.

Now keep in mind that the headset was not intended for PC use. Assemble at your own risk. Its not my fault if your headset or anything else blows up. It is fun to mess around with though. Some of the downfalls that I have seen are; unreadable text of course, very low field of view, very low resolution, it is straining on the eyes, and tends to blend colors that are slightly different shades. I am thinking the blending is an output of the converter, though. But when push comes to shove, if you don’t have a lot of cash then this is the cheapest way to go. It all cost me, including the VGA to NTSC converter around $230 dollars. Now that’s low cost for a Headset.

The Stuntmaster headset ran me $50 dollars off of E-Bay. The UR Gear was also $50 dollars. Then the converter cost me $129 dollars at Best-Buy. All that and about 1-2 hours, and your on your way to VR. 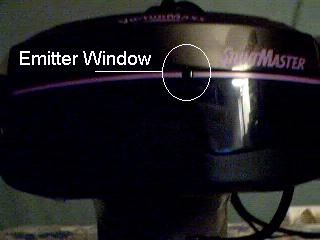 First you have to take 4 screws out of the bottom of the headset. This will separate the top and bottom halves. Then disconnect the main cable that connects the headset to the outside world. It should connect to the left side PC board. Take the earpieces out and now you have two pieces you can work with.

The first thing that you need to do is cut an opening for the IR detector in the top halve of the Stuntmaster. I found that placing the detector from the UR Gear directly in the middle of the headset interferes with the LCD circuit. The option that I took was to place it slightly to the right and glue it to the top halves of the Headset. It needs to be placed so that the window on the IR detector is directly over the purple strip that rides around the outside of the Headset. Mark this spot because this is where you will need to make your cut. Keep in mind that this window needs to be covered like it was in the UR Gear. I took the dark cover from the UR Gear and cut a piece out that matched my cut in the Stuntmaster and used it as my cover. It came out pretty good. 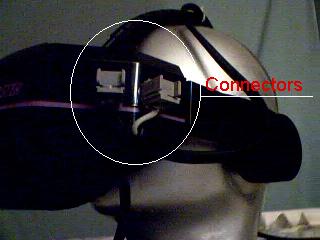 Next is to cut the openings for the UR Gear connectors to be placed. I placed mine on the Left side close to the back as I could. The connectors have grooves in them that will slide into your openings perfect if you cut them correctly. Then just dab it with glue just to keep it in place for sure.

Last thing to do is drill a hole for the microphone. The hole has to be drilled in the bottom portion just slightly bigger than what it needs to be. Once you got it in bend the metal wire over to one side (away from the Power board electronics). Then place two zip ties around the end, cut off the excess and fill the hole and surrounding areas with glue.

Finally you have to wire yourself a connector. A RCA plug has to be made for the video, an 1/8 jack for the speakers, and a power jack. I used one of the connectors that came with the Stuntmaster and modified it. Here is a link with all the pin-outs and directions for wiring it up. HMD.

Put it all back together, taking care not to cut any wires, and there you have it. A low end VR Headset.