The Hillcrest FSM-9 is one of the best MEMs based trackers I’ve used to date. It doesn’t drift and has minimal overshoot. These are major problems in other cheaper MEMs trackers. The sensor fusion is quite good. Latency is reported as 1.8ms by the FSM-9 datasheet, however there is some perceivable lag when using it but it’s low. The trackers are becoming so good that display smear in the HMD is what I’m noticing most. 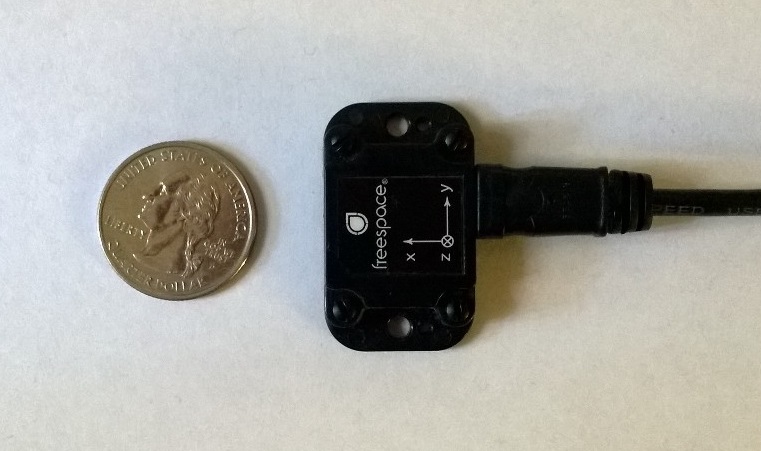 The FSM-9 comes in a nice small black package and interfaces using USB. The price for the FSM-9 is $250 but trust me its worth the money. There’s nothing worse then having a good demo and people pointing out that the head tracker sucks.

The FSM-9 is an update to the previous generation FSM-6. The FSM-9 now includes 3 sensor packages: 3-axis magnetometer, 3-axis accelerometer, and 3-axis gyroscope. Having these 3 sensor packages has become standard these days but it wasn’t too long ago where one of more of the sensors was missing. Lower end systems may still only include the accelerometer and gyroscope.

There’s also an SDK available to interface with the FSM-9 called Libfreespace or even the Hillcrest Freespace Motion studio. The mouse emaulation mode also works quite well. Mouse emulation mode is available as a demo example called “enable_mouse_example.exe” as part of the Libfreespace examples install. The Hillcrest mouse emulation works much better out of the box than the YEI 3-space tracker.

You can find the datasheet of the Hillcrest FSM-9 here.

I’ve also written a WorldViz Vizard plug-in for the HillCrest FSM-9. You can download the plug-in with instructions here. It’s currently hard coded to run at 250Hz. I may add more features in the future such as the capability to switch the sensor sampling rates. I’ve included a working Vizard 5 script for demonstration purposes.