The YEI 3-Space Micro USB head tracker is a nice tracker for the money. I’ve used it as my head tracker for several demos at trade shows for head mounted displays (HMDs). The cost is $102. This tracker contains a 3-axis magnetometer HMC5883L, 3-axis accelerometer MMA8451Q, and a 3-axis gyroscope L3G4200D. 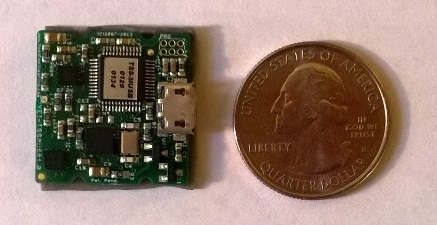 For a quality head tracker the price isn’t bad. One of the major benefits of the YEI 3-Space tracker is the many options available in their 3-Space Sensor Suite. The YEI sensor suite offers all the current popular tracker algorithms. Under Sensors-> Advanced ->Settings you have access to the menu shown below. 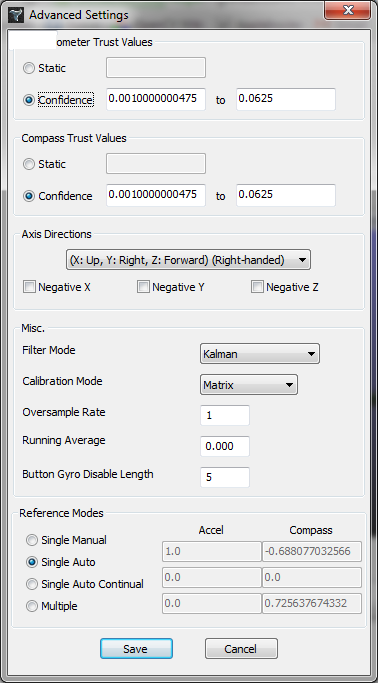 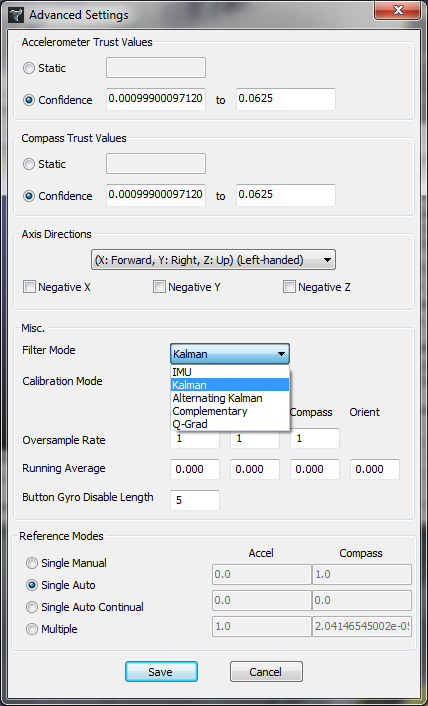 Within that menu there are several tracking algorithms available. These options are IMU, Kalman, Alternating Kalman, Complementary, and Q-Grad. These different filter modes represent just about every currently popular method of computing head tracking yaw, pitch, and roll from a MEMs sensor package. The Kalman filter is the traditional head tracker sensor fusion algorithm but its computationally the most expensive. Especially for microcontroller which are usually the processor in MEMs trackers. Therefore there’s been a lot of work in trying to develop other algorithms that are more microcontroller friendly.

If you’re familiar with these different tracking algorithms, the Mahony and Madgwick algorithms are Complementary filter based approaches. The Madgwick algorithm is said to perform just as good, if not better, than the traditional Kalman approach but with much greater efficiency on a microcontroller fixed point platform. These two algorithms are what are being implemented in most head trackers these days to provide higher update rates.

But enough with algorithm talk. How does this sensor system operate as a head tracker. Pretty well. There is some noticeable lag but its very small. I’ve never been able to get it to work without a lot of over and under shoot when enabling the magnetic sensor. I usually turn the magnetic sensor off but then there’s some drift. The drift isn’t noticeable when you’re actually using the system but when its sitting on the table not moving you’ll notice it. Gyroscope drift is a well known issue when you use just the gyroscope and accelerometer for a heading. Luckily it’s a manageable problem these days for MEMs sensors. 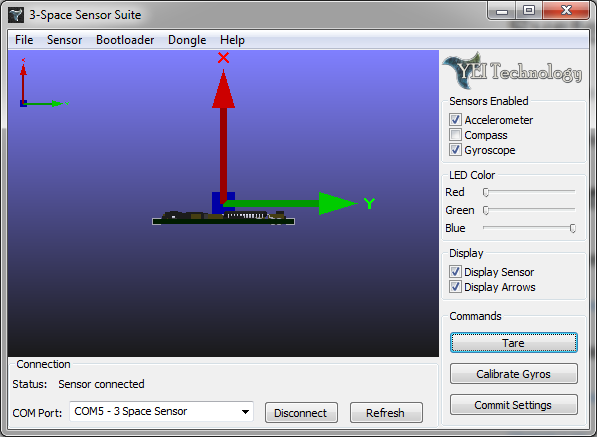 Another major benefit of the YEI 3-Space sensor is that it comes with the software shown above with lots of tweaking available as mentioned previously. Although I prefer the Hillcrest FSM-9 sensor because of lower drift, the Hillcrest doesn’t offer the out of the box software like the YEI sensor. I was actually working on my own sensor package and algorithm development until I saw the YEI sensor. With it’s multiple filtering algorithms available with filter parameters available for tweaking, there’s really no reason to build your own. At $100 you won’t be able to do it cheaper yourself. Unless you’re wanting to learn the details of tracking algorithms… I frequently use this sensor along with FreePie to get pseudo-headtracking in my applications.

The YEI 3-Space Micro USB works well as a head tracker and I’d recommend it to anyone. These sensors, or their next generation counter parts, are what are in the Prio-VR full body tracking system that was recently on Kickstarter. If you haven’t seen some of the Prio-VR demo videos I recommend you head over to the YEI Technology website to check them out. It’s quite impressive how far MEMs tracking systems have come in the last ten years. I only wish the YEI 3-Space Micro USB came in a nice package like the Hillcrest FSM-9.