The Sony HMZ-T2 is an iteration on the Sony HMZ-T1. The T2 has several changes worth noting. The head pad on the HMD has been widened and can now be moved forward and back. The straps at the back of the head have been widened a bit and the latching mechanism is slightly different now. The head phones have been removed to lighten the HMD a bit. There’s an audio jack now available for using your own external head phones. The IPD adjustment is also now individual for each eye. Some of the control buttons on the bottom of the HMD have also been moved around like the volume buttons.

There is also a new larger light shield provided with the T2 which helps block out more of the surrounding environment.

Otherwise it’s pretty much the same HMD. There is one important additional feature on the T2 that wasn’t present in the T1 and that’s the ability to switch the OLED displays into “Clear Mode”. This reduces the perceived smear of the displays by not holding the pixels on the entire frame. What you’ll notice in a game is that as you pan your head around, assuming head tracking, there will be noticeably less smear. This makes for a much better and more immersive experience.

I was able to measure perceived smear of the Sony HMZ-T2 in both normal and clear modes. I used a test program that the US Air Force provided to measure perceived smear. The program runs two bars across the screen and the user is asked to place those bars as close to each other as possible while still maintaining a gap between them. Ideally you can place the bars so that there is only a 1 pixel gap between them. These bars are run across the screen at different speeds and the gap is captured as a measure of perceived smear. A CRT will give a perfect 1 pixel gap for speeds up to and beyond 1024 pixels per second. This test measures both response time and hold time related smear. The Sony HMZ-T2 results are shown below. 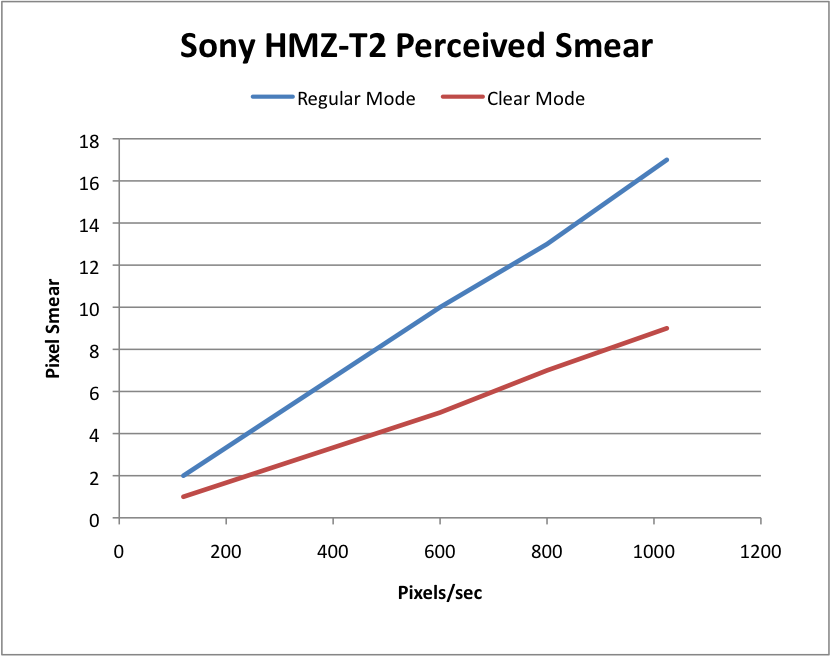 What this means is that a single pixel object at a speed of 1024 pixels/sec will get smeared into 17 pixels in normal mode and 9 pixels in clear mode. This is a significant reduction in clear mode and quite noticeable in a game. When you’re panning your head around in a game using head tracking those pixels are moving quite fast. The Sony HMZ-T2 allows you to reduce some of the hold time smear. There is some flicker that may be noticeable especially when you’re looking at a full screen white background. However, in most normal image situations flicker isn’t noticeable and the reduction in perceived smear is well worth it.

That’s about it. It’s really just an iteration on the HMZ-T1. The fit is still not very comfortable despite the changes in the forehead pad and straps on the back of the head. You’ll still get a big red mark like when using the T1. The optics don’t appear to have changed from the T1.