Recently purchased a Sony Glasstron PLM-S700. I’ve looked at Sony Glasstrons for probably 15 years now. Usually the PLM-A35 or PLM-A55 units come up on eBay. Very rarely does the PLM-S700 unit become available. So when one did, I couldn’t resist. 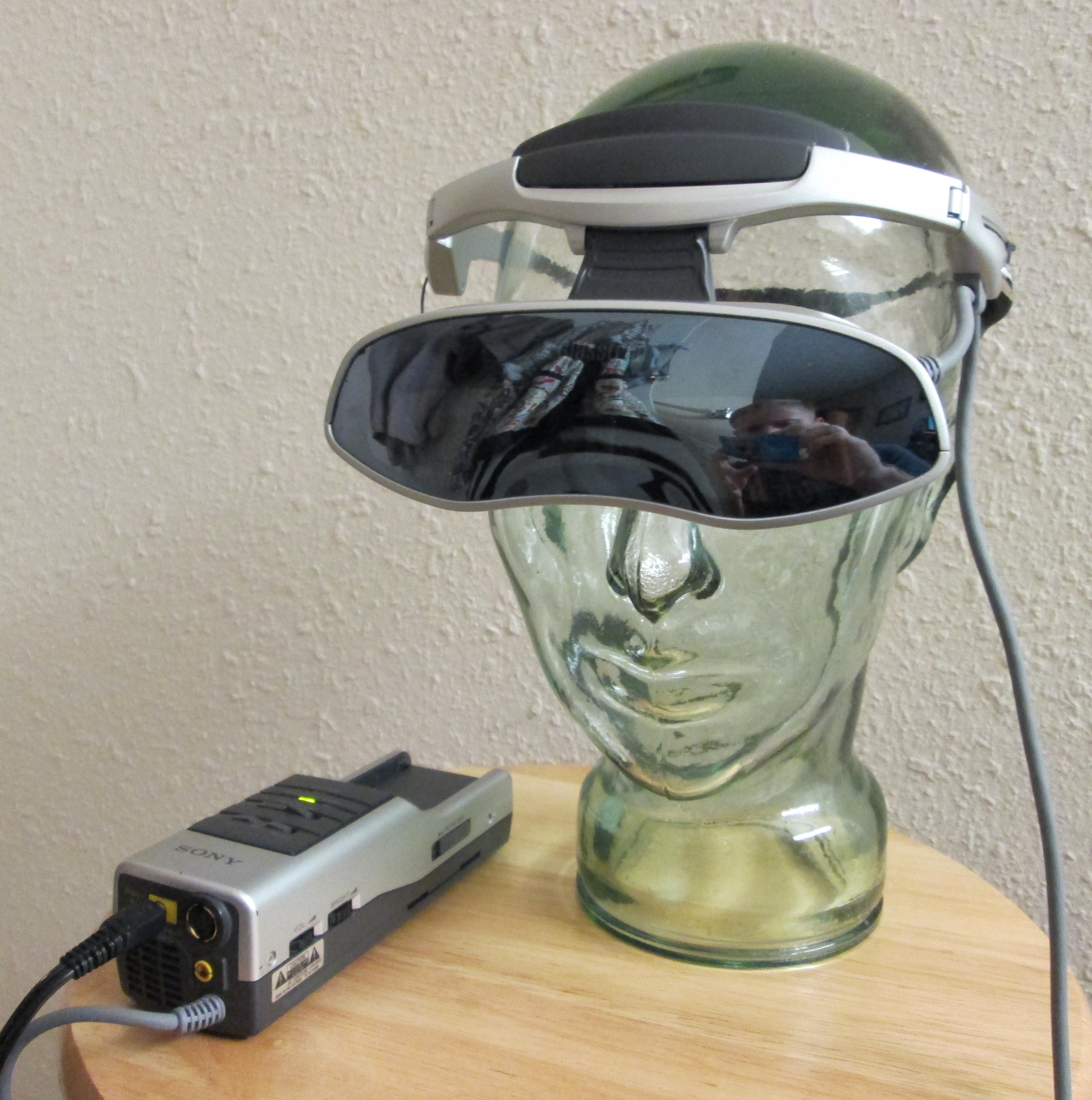 The PLM-S700 has dual 800×600 resolution LCD panels covering a 30 deg. H.FOV by 22.5 deg. V.FOV. That’s 2.25 arcmin/pixel of resolution. This is the highest end Glasstron that was available and it’s quite noticeable due to the variable transmission visor. The visor has an LCD which can be darkened variably using a dial wheel. It also has an interesting mode where just the area behind the screens can be darkened. Yet the rest of the visor can be left as see-through. This is a really cool and innovative feature on a consumer HMD that was released in the United States in 1997. Basically the visor adjustments provide total immersion, total see-through, or non-see through but maintaining situational awareness. You can see the different modes below. Pay particular attention to what can be seen around the main image and behind it.

The controls for the visor can be seen on the Glasstron controller below. The “Screen ON OFF” switch triggers the section just behind the displays to darken in the visor. See the image above where you can’t see behind the image of the center candles and there’s a black border around the edges. The “See Through Closed Open” dial controls the variable tint of the rest of the visor. Again, a very clever design that I haven’t even seen in high end HMDs. The menu button triggers a on-screen display (OSD) as you might imagine. The “Push Display” dial provides the main user interface for triggering buttons on the OSD.

There are some noticeable design features of the PLM-S700 that are seen on the Sony HMZ-T1. The headpad for example looks very very similar in shape. There is also an on-screen image at boot up that looks identical to the HMZ IPD adjustment screen of the line in one eye and the three vertical bars in the other. The quick release buttons for the head band adjustment are also present on the PLM-S700 and remind me very much of the same adjustments on the HMZ series.

Otherwise there are some very slick sliders on the sides of the Glasstron arms that when pulled back away from your eyes retract the ear buds. Again, very clever. Overall there are some really clever and nice design choices on the Glasstron PLM-S700 that I haven’t seen on many other HMDs. Sony really did a good job on this HMD. I would go as far as to say it was way ahead of its time in 1997. These sliders run the length of the arms of the Glasstron and you can just see one of them in the image above for the quick release button. The slider is just below the text in the image.

For an LCD based HMD the image quality isn’t too bad. There’s brightness control like on most HMDs. You can see my FOV Comparison- HMDs page for a relative comparison of FOV to other HMDs.

Here’s a datasheet for the PLM-S700 and PLM-S700E. Here’s a scanned copy of the user manual.