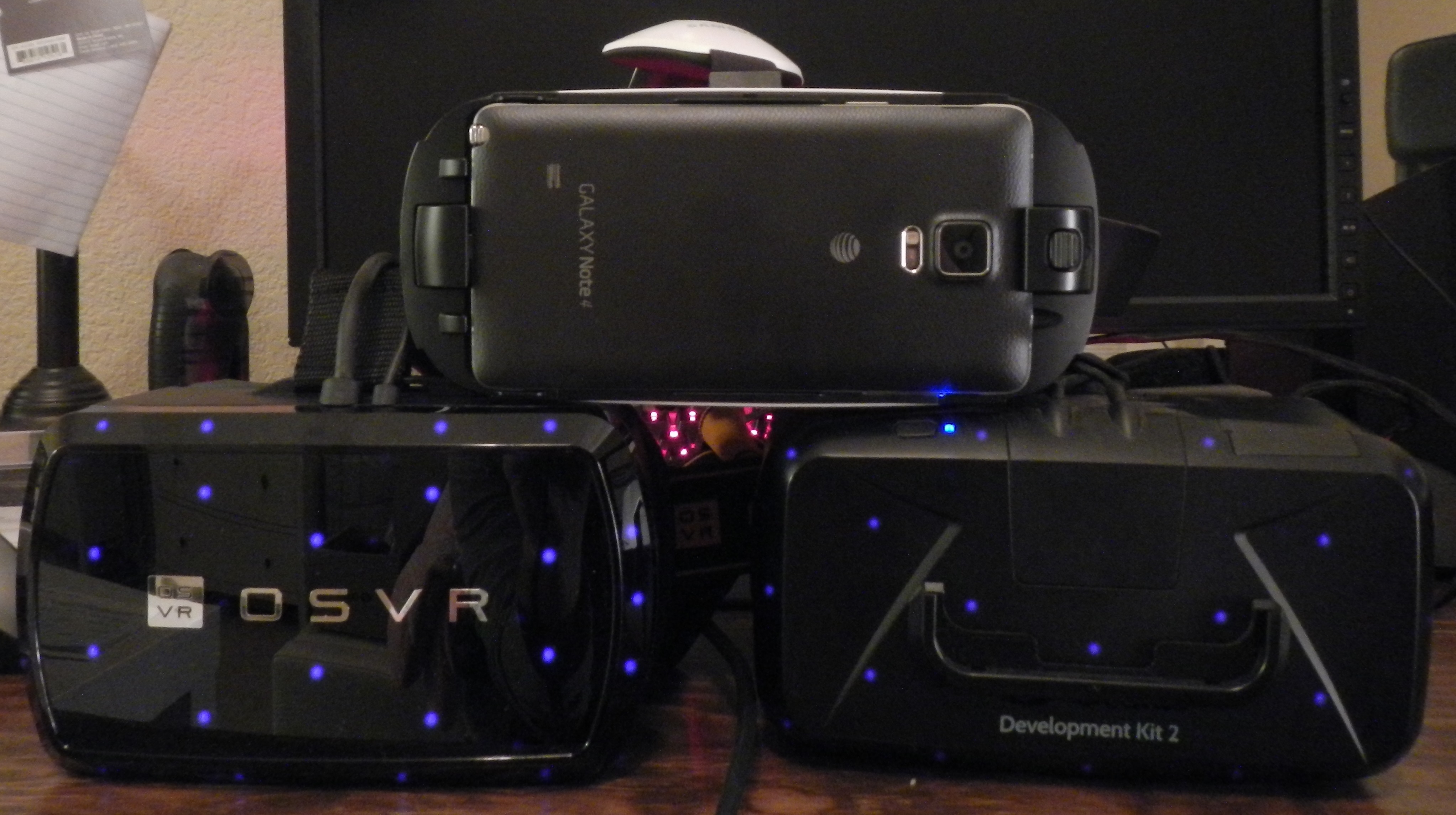 Just received a HDK 1.3 HMD from Sensics/Razer and decided to compare it, after a couple days of use, to the Oculus DK2 and the Samsung Note 4 Gear VR. I’m actually a bit surprised at what I’ve found. I compared all three HMDs using Cityscape Repairman because it was available on all 3 platforms. Setup for Oculus DK2 was direct mode, Razer HDK 1.3 non-direct mode (couldn’t get direct mode working initially but got it working in Showdown), and Gear VR in default mode.

Display Resolution (Pixels)
The display of the Gear VR is by far the best with a resolution of 2560×1440 split for 1280×1440 per eye. DK2 and HDK 1.3 are both 1920×1080 split for a per eye resolution of 960×1080. Not too surprising as I would expect Gear VR to look better just based on looking at the specs. You almost don’t notice the pixels of the Gear VR. The pixels on the HDK 1.3 are larger and much sharper. The image across the FOV of the HDK lenses are quite sharp where as the DK2 blurs towards the edges. I’ve read at CES 2016 the HDK HMDs included diffusion filters to blur the screen door but I didn’t have a chance to try it myself.

Display Field-of-View (FOV)
FOV is largest on the HDK 1.3 which is probably why the resolution looks slightly worse. Next on the FOV list is the DK2 and then followed by the Gear VR. The DK2 has slightly rounded corners compared to the HDK 1.3 and the Gear VR even more so. I have to say though that the FOV differences don’t really make that big of a difference to me. I’d choose Gear VR, DK2, and then HDK 1.3 based on resolution and FOV.

Display Colors
The colors on the DK2 and HDK 1.3 look somewhat similar. If I had to guess I’d say the HDK 1.3 has slightly more vibrant colors. It’s a close call with the DK2. However, the Gear VR colors are goregous compared to both the DK2 and HDK 1.3.

Display Smear
DK2 and Gear VR look gorgeous, with DK2 looking the best. Tons of display smear in the HDK 1.3. Not sure where it’s coming from. I see double edges with the 120Hz update mode which makes me think it’s from their 60Hz being doubled to 120Hz. Even tried an experimental 240Hz update mode which produced 4 edges when panning around.

Tracking
Wow, tracking really stands out on the DK2 as the best. Then quickly followed by the Gear VR. Lastly by HDK 1.3. Positional tracking on HDK 1.3 is experimental at the moment. The HDK 1.3 fused position tracking is getting better but still has jumps here and there and doesn’t center you correctly in the scene. The DK2 positional tracking is flawless compared to the other two. Gear VR only has head orientation but otherwise is very smooth and responsive. Tracking is DK2 all the way, followed by Gear VR, and then HDK 1.3. I’d choose really good orientation tracking over not so good positional tracking.

Construction
The Razer HDK 1.3 is built nicely and feels good to hold. I’d say the build is slightly better than the DK2. Fit is similar except for the optics in the HDK 1.3 tend to hit me in the eye sockets. I think the HMD needs to be a bit further from my face to avoid this but there’s no adjustments for this like the DK2. Gear VR feels good. I’d say in build quality it’s HDK 1.3, Gear VR, and then DK2.

Overall I’m a bit surprised that the Razer HDK 1.3 isn’t better all around than the Oculus DK2 given that it came out so much later. I also expected the display to be much better. Positional tracking, which I was really excited about on the HDK 1.3, still needs some work but it getting better. Right now the thing killing the HDK 1.3 when compared to the DK2 and Gear VR is the panel smear and double/quadruple edges.

My gut feel at this point is that the ONLY thing Razer HDK 1.3 has going for it is being Open-sourced which may not matter for many developers and probably doesn’t matter for any end user. The content for Oculus and even Gear VR is so much greater that I wonder if OSVR will be able to catch up. OSVR and the HDK 1.3 is a great idea but unless a large group of open-source developers get behind it, I’m guessing support and use will be minimal.

I do still look forward to working with the Razer HDK 1.3 in order to see what an Open-source HMD can do for the VR community. Support is great and the SDK is constantly improving. I’d really like to get one of the diffusion filters to try out and see how it affects the display quality.

Update: Just played the Showdown demo on the new Rift CV1. Now that’s how it’s supposed to be done! Flawless.