I’ve held onto some of my favorite virtual reality (VR) books over the years and wanted to post a page giving a quick summary of each. Some of these books got me started building VR gear in the early nineteen nineties. Several others I reference to this day on the job. I haven’t seen many pages giving suggestions for VR books on the internet so I thought this may be useful for those looking for information on VR.

This is also a very project oriented website so I’ll start with the project based books. I was going to review them all and then post this page but I thought it might be more useful to post them as I go. Therefore, this page will grow as I re-read some of my favorite VR books.

Experiments in Virtual Reality
One of my favorite VR books is “Experiments in Virtual Reality” by David Harrison & Mark Jaques. This book is data glove centered starting off with a do-it-yourself (DIY) glove and following with software to use the glove. One of the first things I did in VR was hook a Nintendo Power Glove to a PC. The next thing I did was read this book and build the “optical tube” version of the DIY glove. I also mimicked the software in the book to recognize American Sign Language (my brother is deaf) which is also an application they mention early on. I still work on and build data gloves today partly because of this book. 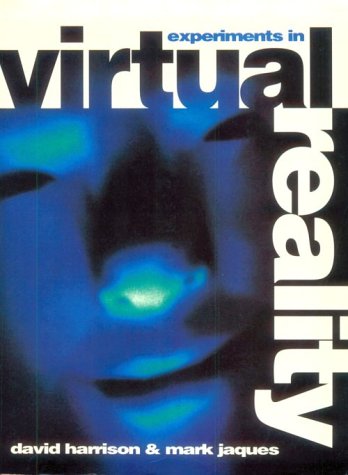 Experiments in Virtual Reality gives a very brief intro to VR in Chapter 1. Chapter 2 begins with a brief over view of some commerical data gloves including the VPL Data glove and the Nintendo Power glove. It then goes into an explaination of how to build a data glove from tubing, LEDs, and phototransistors. In the 1990’s I built this data glove from parts from Radio Shack. I also purchased a stand alone A/D converter from Radio Shack that came with Qbasic code. This would later became one of my first VR webpages on Mellott’s VR Page, originally hosted on Geocities. My original data glove project is still maintained on this site here.

Chapter 3 goes into the modeling of a hand and how it can be represented in software. I used this to write one of my very first programs (as an adult) to display a hand on a monochrome screen while recognizing sign language. It was a very exciting time.

Chapter 4 goes into tracking devices where it gives a project plan for building your own ultrasonic tracker. I never did this project but to this day I still think about it from time to time.

Chapters 5, 6, and 7 then go into 3D, modeling, and then virtual applications.

This book is a very simple read yet gives a lot of exciting project ideas for those getting started in building their own VR gear. There are few books like this one and it’s one of my highest recommended books for those interested in data gloves. The entire book is just over 100 pages long. It’s a must have if you’re a data glove enthusiast like myself. 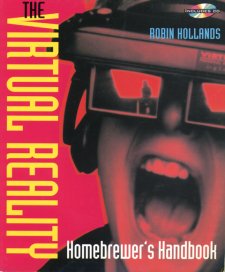 Chapter 1 gives a very basic introduction and talks about some of the supplies you may need. It also gives some safety tips so you don’t cut your arm off making VR gear.

Chapter 2 gives a high level introduction into computer graphics. It goes over matrices, translations, rotations, and cross-products. Concepts introduced are world coordinates, view-point coordinates, planes, lines, and vertices. This chapter concludes with a brief mention of shading and lighting. A great 10,000 foot view of the concepts as to not scare people off too early in the book.

Chapter 3 goes into VR Software. This chapter brought me back 15 years to my first days of using a Nintendo Power Glove in Rend386 and AVRIL. Probably the most famous VR software of that time was Rend386 by Dave Stampe and Bernie Roehl. I remember using that software so many times!! I think many, if not all, of the VR software I used in the late 90’s came from the CD-ROM in this book. I recognized all of them: REND386, 2Morrow, AVRIL, VROOM, 3D-Ware by Virtek, Virtus Walkthrough Pro, WorldToolKit for Windows, Renderware, and even DOOM. My Power Glove page shows the first VR world I built using Rend386 or AVRIL, I can’t remember which. It was really just an animation but I remember being so proud. hahahaha. I spent a lot of time in those days downloading VR code from AOL groups.

I had also spent a lot of time at some point building a Egyptian Pyramid world using the Virtus Walkthrough Pro software on this books CD. I’ll have to dig through some of my old floppy drives and see if I can find the code. So much fun.

Chapter 4 discusses Head Mounted Displays. The chapter starts with a basic introduction to acuity, IPD, convergence, FOV, resolution, and stereo 3D. These are important parameters in HMD and misunderstood my most consumer level users of HMDs. Many new users of HMD would benefit from this very high level overview of these topics. LCD versus CRTs are also briefly introduced as they were the display technologies of the time. Don’t be put off by the low resolutions of 267 x 225. This was common in the 90’s!!

Chapter 4 then introduces 3 of the most common consumer HMDs of the day. I started my early VR days first with a VFX1, then I-glasses, and even the CyberMaxx. All three are introduced with some of their specs. Interestingly enough the Atari IVR from Virtuality is mentioned all though it was never commercially available from what I understand.

There are a few pages discussing programming with the Cybermaxx. Then 3 HMD projects are introduced: monocular, biocular (NOT binocular!), and then a head coupled display. These are still relevant chapters. You may find many similarities in these projects with some of the current HMD projects happening on the internet. Things have improved like head trackers and displays but the core ideas and concepts are still the same. This is true even if the current VR enthusiasts don’t want to believe it. hahahaha.

Chapter 5 Head Trackers. To be continued…