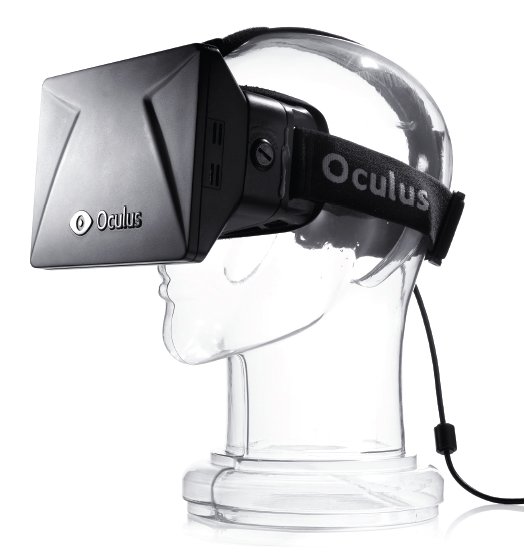 The Oculus Rift development kit is an interesting piece of virtual reality (VR) hardware that is being introduced during a second coming of VR gear. It’s a head mounted display (HMD) with a very wide field of view (FOV) targeted toward the gamer who wants total immersion. To really review this HMD you need to talk about three things: the story, the hardware, and the hype.

The Oculus Rift is the result of Palmer Luckey and his desire to build the perfect HMD. Starting at home building versions made out of duck tape and cardboard, Palmer was discussing his HMD design on MBTS3D.com online forums. It was here that Palmer attracted the attention of John Carmark of id Software. For those who aren’t aware, John Carmark is the man behind Doom and Quake. John Carmark was experimenting with his own HMD designs and came across Palmer Luckey. John asked to buy one and Palmer sent one to him immediately for free.

John Carmark showed an Oculus Rift prototype at E3 2012 running Doom 3 BFG. Stories of “John’s HMD” quickly exploded and soon everyone began asking about Palmer Luckey’s HMD. Very quickly after the E3 publicity, Palmer officially launched his company Oculus via Kickstarter for the Rift development kit. The Oculus Rift development kits from Kickstarter have been delivered to almost 10,000 Kickstarter backers and Oculus is now taking pre-orders on development kits outside of Kickstarter. In the latest round of news Oculus has secured $16 million in private funding to hire talent to build their next generation HMD. Very impressive results indeed. Hats off to Palmer and the Oculus team.

The Oculus Rift development kit is a head mounted display with a single 1280×800 resolution LCD panel shared with both eyes. The field of view is 90 degrees horizontal by 90 degrees vertical. It comes with an integrated head tracker custom designed by Oculus for the Kickstarter effort. The HMD is housed in a very comfortable ski goggle like housing with head straps that go around and on top of your head.

The optics consist of a single lens per eye which cause heavy distortion that has to be electronically pre-warped before going to the panel. Prior to distortion you’re splitting the 1280×800 panel into 640×800 per eye over 90 degree field of view. Taking into account the barrel pre-distortion that must be applied, the actual resolution being used for each eye is much lower than 640×480. This unfortunately results in a very low perceived resolution. The Rift accepts HDMI or DVI video input, has USB output for head tracking, and includes brightness and contrast controls.

Resolution is determined by both the number of pixels you have and the field of view of the optics. A person with 20/20 visual acuity can see approximately 1 arcmin/pixel (lower is higher resolution). The Oculus Rift, not taking into account the distortion, sits about 8.44 arcmin/pixel. That’s close to the VFX1 from 1995 that had 263×230 resolution LCDs per eye over a 35.5 degree horizontal field of view giving 8.1 arcmin/pixel. You can see a comparison of the VFX1 and Oculus Rift images taken through the same camera and the same settings below. The Oculus Rift overfills the camera FOV but the VFX1 fills 35.5 degrees horizontal. Zoom in and you can see they’re very similar resolution wise. One thing you’ll notice is that LCD panel fill factors have improved quite a bit since 1995.

Oculus says the consumer version of the Oculus Rift will have an LCD panel that will be higher resolution mitigating peoples current concern over low resolution. Even with a 1920×1080 panel in the consumer Rift, you’ll still have 5.625 arcmin/pixel horizontally if we get 1920/2=960 per eye, again ignoring distortion correction for now. That’s still too low. The vertical at 1080 pixels will be 5 arcmin/pixel for the Rift. These resolutions are still lower than a Vuzix VR920 with 640×480 resolution displays over 32 degree horizontal FOV (3 arcmin/pixel). For comparison, the ST1080 HMD from Silicon Microdisplay is the highest resolution consumer HMD currently available at 1920×1080 per eye over 39 degree horizontal for 1.22 arcmin/pixel.

To achieve 1 arcmin/pixel you’d need 5400 pixels PER EYE at 90 degrees horizontal!!!! Unlikely to happen for some time. Remember, it took almost 18 years to go from 263×230 to 1920×1080 in a consumer HMD (VFX1 versus ST1080). However, if you’re willing to live with lower resolution in order to get higher FOV and immersion, then maybe low resolution isn’t an issue for you. Oculus chose to completely sacrifice resolution to get FOV. That’s one way to do it. Other HMDs completely sacrifice FOV for resolution (ST1080). I think a better choice is something in the middle.

A 70 degree optic with 1920 horizontal pixels would give 2.19 arcmin/degree. Not quite 90 degrees but much better than the typical 35 to 40. At 70 degrees and 1920 pixels horizontal that’s just slightly worse than the resolution of the current Sony HMZ-T1 with 45 degree horizontal FOV and 1280×720 per eye. However we’d have 25 more degrees of FOV horizontally. An image of the Sony HMZ-T1 eyepiece is shown below using the same camera and settings as the Rift and VFX1 images previously. Also notice how much better the colors and contrast look on the OLED panel of the Sony compared to the LCD panels of the Rift and VFX1. HD OLED displays are what need to be in every HMD.

There is quite an excellent Oculus screen simulator online. You can play with the panel resolutions to get a simulated view of what you’ll see. You’ll notice that although a 1920x1080p panel is an improvement, it’s no where good enough. The only one I find acceptable is the 4k panel. Even the 2560×1440 isn’t quite good enough. I’m guessing you’ll see the consumer device come out with a 2560×1440 OLED panel, but Oculus should really release CV1 with a 4k panel. Maybe that partnership with Samsung will help out…

The hype is where I disagree with most people, reviews, and comments about the Oculus Rift. The Rift type of hardware has been around for some time now. What’s new with the Rift is the price point and the software support. Don’t get me wrong, these are big deals in themselves and I think Oculus has done a great job at convincing developers to support the Rift, however the Rift is not the magical savior of the VR world that everyone claims it to be. It’s really nothing new at all. It’s old hardware being re-introduced to people who have never seen this type of thing before. People just got used to the narrow 25 to 35 degree FOV of HMDs like the Vuzix VR920 or Wrap 920 and forgot that these other wider FOV designs exist. The Rift is not much different than the NASA VIEW HMD from the mid 1980’s (I’ll leave it to you to Google this HMD). It doesn’t look all that different either.

Overall I think the Oculus Rift is a very cool HMD to play around with for $300. I don’t think I can even build one myself for that low of a price tag. It definitely targets the gamer market correctly and seems to have a large fan base. The head tracking works great and is noticeably lower latency than other head trackers I’ve used. The fit of the HMD is very comfortable especially when compared to the Sony HMZ-T1. The Rift comes in a very professional case with cables and lenses for normal sighted, near sighted, and far sighted customers along will all necessary cabling. Every HMD should come in a professional case like the Rift. 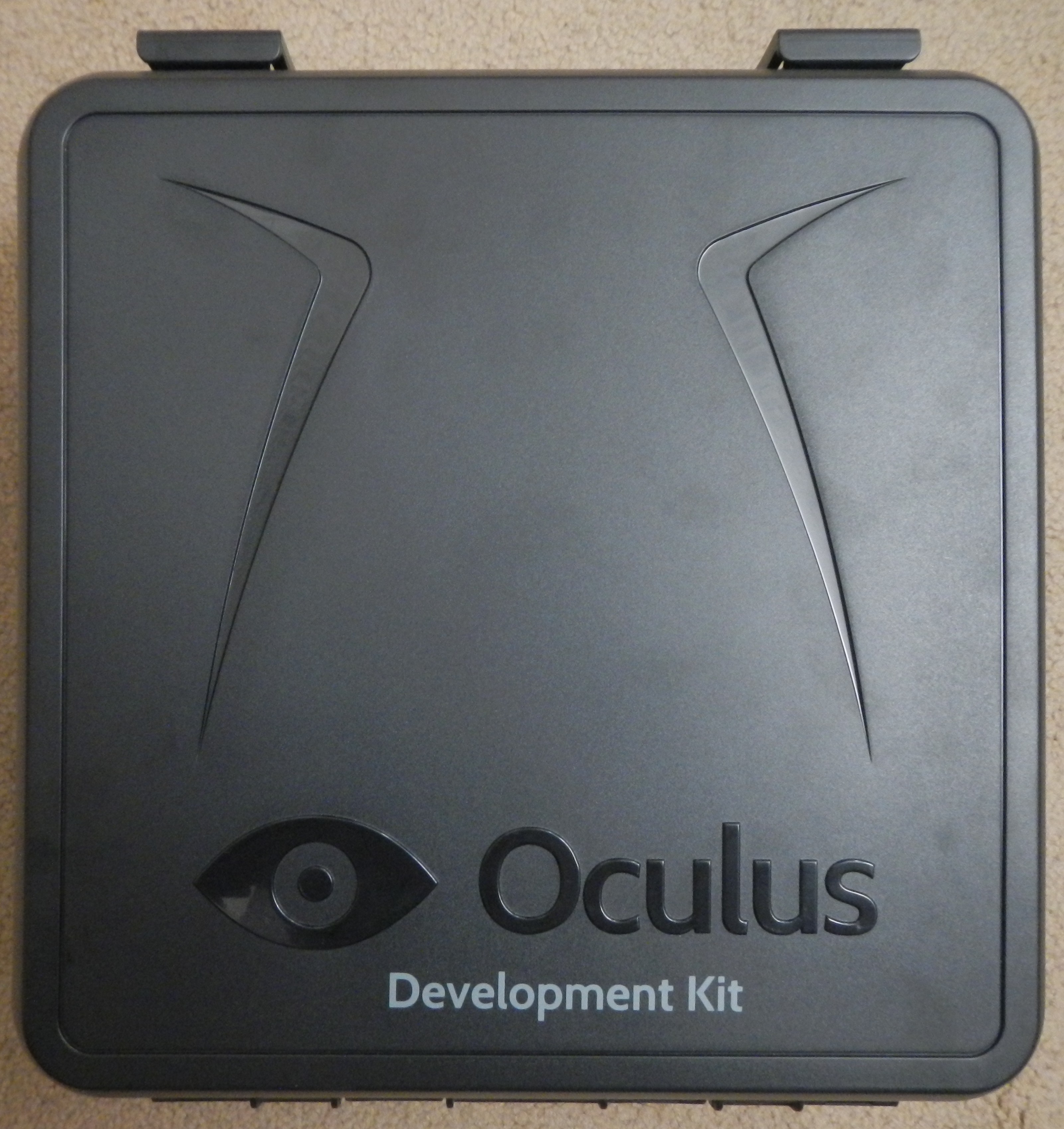 Oculus also has great customer service. My first unit had a defective tracker and within a day or so of posting on their forums I was contacted about a replacement. The Oculus Rift is not the messiah of VR as the hype would lead you to believe but I don’t think Oculus could have done any better for $300.

Smear Performance
I was able to measure the Oculus Rift perceived smear of the LCD panel. I used a test program that the US Air Force provided to measure perceived smear. The program runs two bars across the screen and the user is asked to place those bars as close to each other as possible while still maintaining a gap between them. Ideally you can place the bars so that there is only a 1 pixel gap between them. These bars are run across the screen at different speeds and the gap is captured as a measure of perceived smear. A CRT will give a perfect 1 pixel gap for speeds up to and beyond 1024 pixels per second. This test measures both response time and hold time related smear. The Rift results are shown below. 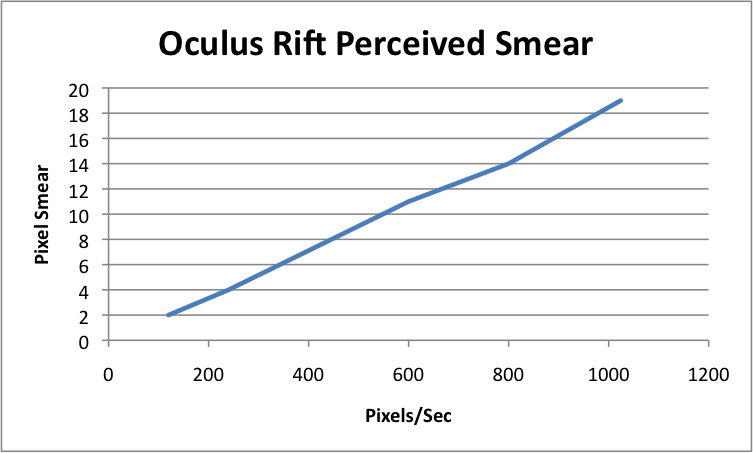 As you can see in the data above at 1024 pixels per second, which isn’t that fast, the Rift LCD panel will have a perceived smear of 19 pixels. That means a single pixel wide object gets smeared across 19 pixels. This can make a big difference especially with head tracking. As you pan your head around those pixels are moving fairly quickly and they all get smeared out. This type of perceived smear response is typical of LCD panels. Perceived smear is improved typically by increasing frame rate, pulsing the backlight, or a combination of both.