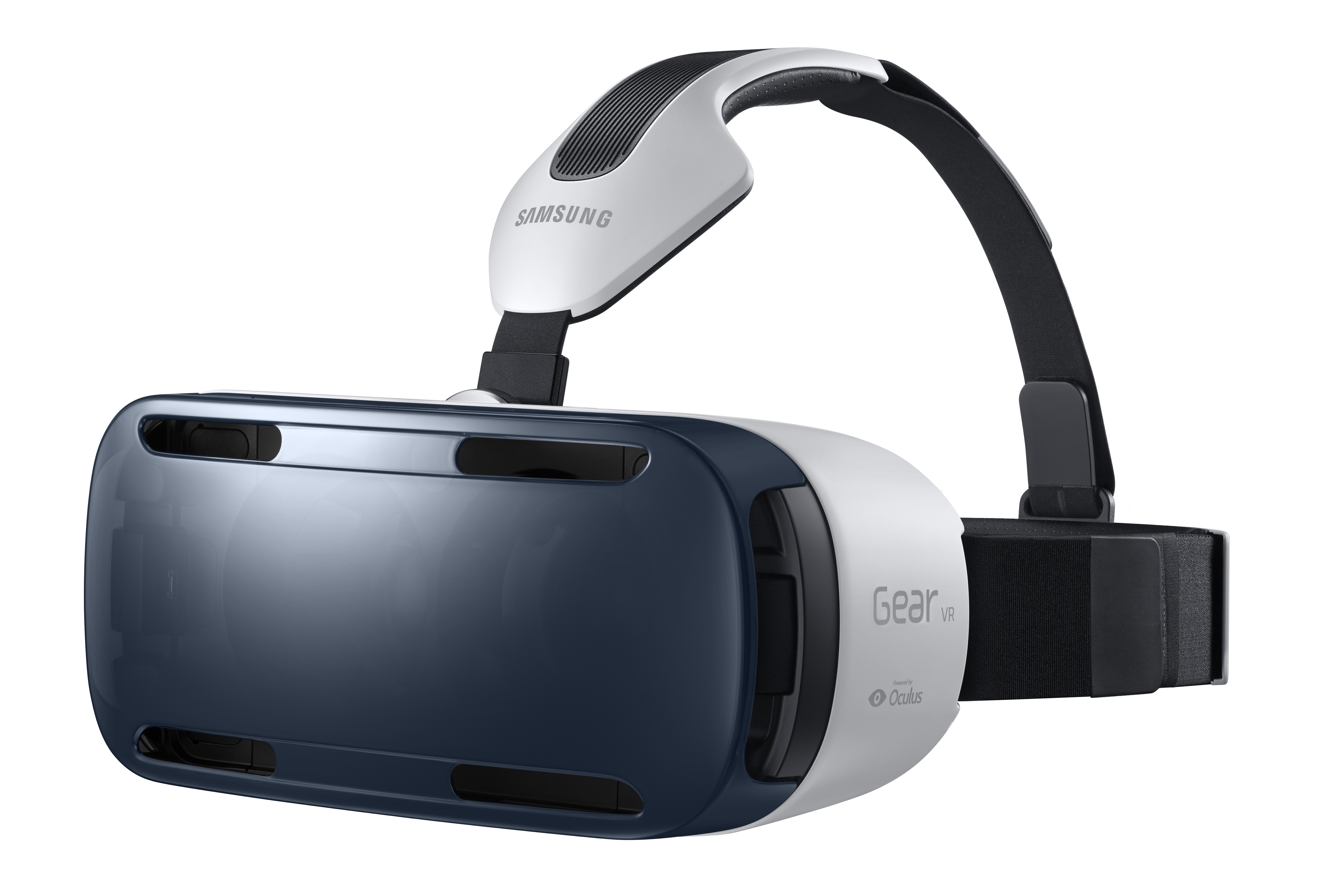 The Samsung Gear VR surprised a lot of people, myself included. It’s interesting that in 2015 it’s the first consumer HMD of the new VR wave. And it’s very good in multiple avenues.

Resolution and FOV
The resolution of the Gear VR Note 4 is 2560×1440 for a per eye resolution of 1280×1440. This is the best resolution on an HMD right now and supposedly higher than even the first consumer Oculus and HTC Vive HMDs (1080×1200 per eye). The FOV of the Samsung Gear VR Note 4 version is reported by Samsung to be 96 degrees. I’ll assume that’s horizontal given it’s hard to verify that spec currently. That gives this HMD a resolution of 4.5 arcmin/pixel horizontal resolution. For reference the Oculus DK2 resolution is 5.625 arcmin/pixel horizontal. That’s a visible improvement. The FOV seems to be slightly smaller than the DK2 when doing a side by side comparison. The Note 4 Gear VR seems to have more rounded corners.

Display Smear and Color
The color on the Gear VR given it’s an OLED is also beautiful. The Note 4 has more vibrant colors than seen on the DK2. Display smear is also visibly low but I haven’t been able to measure it yet. I’m assuming they’re doing the same type of PWM smear reduction as the DK2 and on other HMDs.

Tracking
The Note 4 Gear VR has orientation tracking for the head. No positional tracking like the DK2 with camera. However, the head tracking on the Gear VR is quite good. Very low latency and very responsive. I’ve read some articles claiming sub 20ms. The headset itself contains a head tracker that’s used in place of the sensors on the Note 4. This was a great choice because as anyone who’s used a Google Cardboard knows, the phone on board sensors just aren’t good enough. Tracking on Gear VR is excellent.

Build
Build is quite good and feels solid. It is plastic but seems well designed. You snap the phone in from the front. A slide into the USB port and then it latches in on the opposite side of the phone with an audible click. There’s a front cover to put on but I never do. The Note 4 version of the Gear VR also has some plastic on the back of the head and on the front which attach to the straps. I actually like these quite a bit as it makes it feel more solid than just fabric straps. However some have complained about the plastic portions being uncomfortable. It seems to provide solid support. Samsung has removed these pieces on new versions of Gear VR.

Weight
I don’t personally mind the weight of the HMD. It’s fairly light and not unexpected given VR goggle style HMDs. Nothing too surprising here.

Interface
Here is one place that Oculus and Samsung really shine. The interface for Gear VR is brilliant. There is a small track pad on the right side of the HMD which is the main “mouse” like interface. All navigation with the Gear VR is done here through an onscreen interface which shows applications in a tile style much like can be seen in iTunes. The system starts up in a virtual living room with your tiles floating in front of you. You scroll through different games/experiences by swiping the touch pad. The interface is smooth, simple, and intuitive. It’s brilliant.

No Setup and No Wires!
This is another area where the Samsung Gear VR just shines. No more setup and wires like you have to deal with for HMDs like Oculus DK2 or others. There’s a lot to be said for this. The setup just works. No fiddling. No checking connections. No worrying about software versions and startup order. Just plug it in and it works. Also, no more wires to tangle up in. I personally was surprised here at how much easier it was to use as an HMD due to no wires. It’s great and a vision of the future of more powerful wireless HMDs.

The Drawbacks
Games and applications on Gear VR are far simpler than the DK2 counter parts. As you’d expect this is due to the lack of horsepower available. Don’t get me wrong though, it’s quite amazing what’s being done on this HMD. However, it can never rival a desktop PC for compute power and GPU power. Therefore games are much simpler and tend not to allow so much freedom to roam. However, games like Anshar Wars 2 and Salvo Bandit Six are quite good. The better games tend to play off more cartoon looking graphics but still look beautiful. Right now not all new Gear VR games are made available for the Note 4 version but there are still quite a few new ones.

This lack of horsepower also means applications are pushing the Note 4 to the max so you’ll occasionally see stuttering. The biggest thing is that it sometimes overheats. This can be quite annoying especially when showing people demos. You’ll get an on screen message telling you that you need to let the phone cool down before continuing. It seemed to happen more when I first got my Gear VR but still occasionally occurs now.

Closing Remarks
The Gear VR is a great HMD and provides a simple intuitive interface which really shines. Not having to deal with setup issues and software makes it an easier sell for the more casual VR player. No mess of wires and no worrying about tangling yourself up is a big plus. As the first real consumer VR HMD in this new wave, Oculus and Samsung hit a homerun. It really is a nice HMD and content is decent at this point. There’s a mix of games and experiences that show off the potential of the system and of the future of consumer VR. The visual quality of the optics and display are the best you can get right now in consumer level VR. It’s even better than some up and coming HMDs. If you can forgive the lack of positional tracking and the simpler applications, you’ll love this HMD.