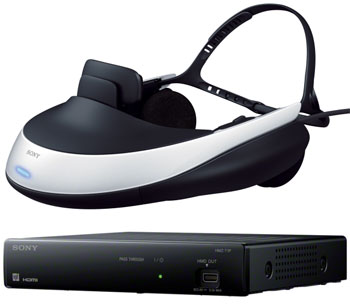 The Sony HMZ-T1 was the first high resolution head mounted display available for the consumer below $1k. It has 1280 x 720 resolution over a 45 degree horizontal by 25.3 degree vertical field of view (FOV). It uses Sony OLED microdisplays so the colors are vibrant and the black levels are very dark. The Sony HMZ-T1 provides a beautiful image over a very respectable FOV. It doesn’t include a head tracker so you’ll need to add your own. HDMI is the video input and it requires an AC power connection.

The Sony has one major fallback and that’s the physical fit. If you spend some time adjusting the straps correctly the fit can be tolerable. However most people don’t adjust the head straps correctly and so just clamp it to their head, which can cause headaches. Nevertheless, even with proper adjustment you’ll end up with a red mark on your head from the fore head pad. There are numerous pad accessories that can be purchased to help mitigate the fit issues. Several people have even resorted to custom mounting. You can check out my Sony HMZ-T1 mounted in a VFX1 shell here.

There is an IPD adjustment on the HMZ that will require adjustment per user. You have to adjust the IPD individually per eye. The goal is to try to get all four corners of the image as clear as possible. This isn’t always possible and it may require switching out the different A,B,C size head pads that come with your headset. Beyond that when you put the headset on you’ll have to go through some setup screens each time. Once through the setup screens you should see your video source.

There are numerous on screen settings available on the Sony HMZ-T1, however, the most useful are the 3D settings. The HMZ can do side-by-side stereo as well as frame packed stereo. If the native resolution is used at 720p then 60fps is possible per eye using frame packaged stereo. If the video is 1080p then only 24fps will be available for stereo in frame packed stereo mode. You’ll need stereo drivers that can support frame packed of course. These stereo formats are part of the HDMI 1.4a specification. Nvidia 3DTV play works nicely. Side-by-side is very convenient for systems that don’t support stereo directly and can be used with older or custom programs. YouTube also supports side-by-side stereo videos when the 3D option is available.

The Sony HMZ-T1 is by far the best consumer HMD I’ve used to date. It has a nice tradeoff of resolution versus FOV that doesn’t sacrifice one for the other. It wasn’t too long ago that an HMD with this type of resolution would have cost tens of thousands of dollars. To have something with such a nice image in each eye for sub $1k is amazing.

There have been some that have criticized the Sony and complained of a “screen-door effect”. Yes, the resolution could be slightly higher. The human eye can see approximately 1 arcmin/pixel. The Sony HMZ-T1 has about 2 arcmin/pixel of resolution so pixels can be seen. But they’re pretty small. Compare that to the VFX1 with 263×230 resolution at 45 degrees FOV which has about 8 arcmin/pixel resolution. People who complain about the Sony HMZ-T1 don’t remember where we came from. I also don’t believe resolution should be completely sacrificed for field of view. Either way, FOV versus resolution can be a matter of preference/opinion. I currently use the Sony HMZ-T1 in a VFX1 shell as my HMD of choice. Add a head tracker and its a pretty sweet setup.