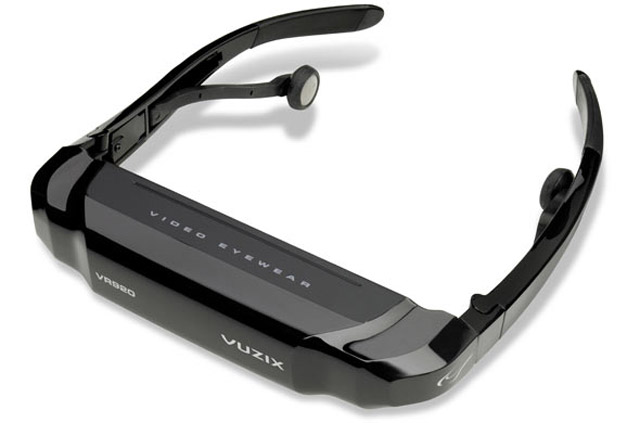 First things first. This HMD is BEAUTIFUL!!! The design of the VR920 is elegantly done. They feel and wear like a pair of light glasses yet the VR920 pleasantly reminds me of the VFX1. I opted for the Immersion Visor for an extra 12.00 and its well worth it. The system is plug ‘n play and extremely easy to install. Simply install the drivers and your off running. It has twin 640×480 displays, built in head tracker, mic, headphones, and on-screen display adjustments. It also does STEREO3D!!! The VR920 connections consist of a VGA port and a USB connection. There’s no break out box for this headset which makes it even more beautiful. I really think this is the first HMD in the sub 500 dollar range that is worth every cent. At a price of 399 you won’t get anything better at the consumer level.

I was able to play Quake4, Fear, and DOOM3 using the VR920. The only down side is the lower resolution. The stereo drivers can also be a bit slow. The refresh rate I hear is cut down to 30 frames a second per display when in STEREO3D mode. So when your turning your head quickly the screen doesn’t refresh fast enough and this can be disorienting. Don’t let this deter you though. I thought stereo3d was cool but headtracking is what makes the game. I play most of my games without stereo3d. However, the demo games that come with the 2.0 and 2.1 installs are very well done. I’ve played hours of the AxySnake game just to check out the nicely done environment in stereo.

As for the lower resolution, it doesn’t bother me one bit. I’ve always preferred more immersion and headtracking to resolution. That’s cause I’m an old VFX1 fan. You quickly forget that the displays are 640×480. I didn’t notice much pixelation that is common with lower resolution displays but you can see it if you look hard enough. Especially on white backgrounds. I also played with the on-screen setting a bit in each game to get the optimal brightness and contrast levels.

I was so impressed with this headset that I wrote a letter to Vuxiz praising their hard work and excellent design. I had purchased a Z800 Emagin headset and was very disappointed that consumer VR HMD’s hadn’t progressed much over the last 10 years. Then I purchased the VR920 and the excitement I felt when I first played Quake2 with a VFX1 came rushing back to me.