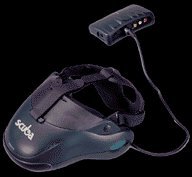 The Philips Scuba Visor is a decent headset for being just a video headset. The construction is rugged and well placed and it has a rather high FOV compared to other headsets. It does of course have its downfalls.

The field of view for this headset is pretty good compared to other headsets. It’s rather wide. I would guess a FOV of about 45 degrees horizontal. I was impressed by this feature. It also comes with adjustments for brightness and contrast. These are nice features especially when playing dark games like Quake.

The control box contains the electronics for the input of the power supply. It also houses the connection for the headset, which looks kind of like a keyboard plug. The volume control is housed here too. On the side of the box is the On/Off button along with a timer feature. This timer feature will shut of the headset after every thirty minutes of use.

Sound from the headphones on the Scuba was good. I was impressed with how well it sounded on my DVD player. The volume can be turned up rather high without distortion.

The unit rests on your forehead and has a type of facemask. It’s similar to the Virtual Boy. It’s a rubber type of material that cuts you off from the outside world. It presses against your face like a "Scuba" mask. Imagine that!! It is also supported by a harness that straps to your head with a type of cradle that covers the back of your head. Its not too uncomfortable, for having a TV strapped to your head.

This headset would have been one of the best, I had ever used, if it wasn’t for the blurry optics. The screen always seems a little blurry and after awhile causes your eyes to hurt. The placement of the lenses seemed a little wide for me. It was almost like I could see the section between the eyepieces. There is a IPD adjustment. It seems to rotate the screen slightly.

Compared to the others the Scuba beats all of them in the category of Field of View.  Otherwise you would probably be better off with a pair of Virtual I/O Glasses. On a scale of one to ten, I would give this headset a four. Just because I felt the optics where blurry. But then again, this is the norm in HMD world.